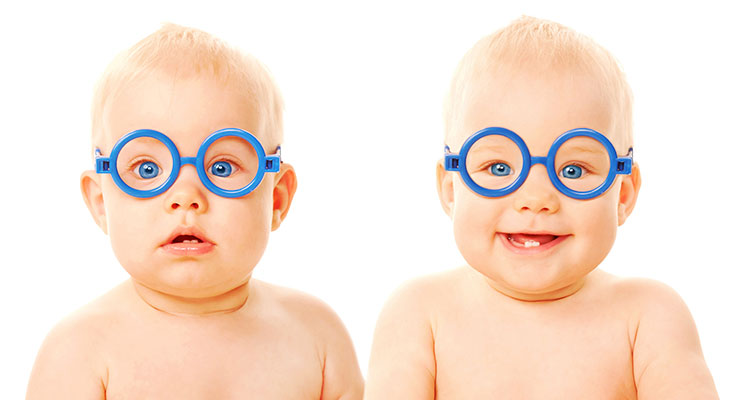 Even after your child’s physician assures you that your baby is normal, you may find that she looks a bit odd. Your baby does not have the perfect body you have seen in baby books. Be patient. Most newborns have some peculiar characteristics. Fortunately they are temporary. Your baby will begin to look normal by 1 to 2 weeks of age.

This discussion of these transient newborn characteristics is arranged by parts of the body. A few minor congenital defects that are harmless but permanent are also included. Call our office if you have questions about your baby’s appearance that this list does not address.

Molding refers to the long, narrow, cone-shaped head resulting from passage through a tight birth canal. This compression of the head can temporarily hide the fontanel. The head returns to a normal shape in a few days.

This refers to swelling on top of the head or throughout the scalp caused by fluid squeezed into the scalp during the birth process. Caput is present at birth and clears in a few days.

This is a collection of blood on the outer surface of the skull. It is due to friction between the infant’s skull and the mother’s pelvic bones during the birth process. The lump is usually confined to one side of the head. It first appears on the second day of life and may grow larger for up to 5 days. It doesn’t resolve completely until the baby is 2 or 3 months of age.

The “soft spot” is found in the top front part of the skull. It is diamond shaped and covered by a thick fibrous layer. Touching this area is quite safe. The purpose of the soft spot is to allow rapid growth of the brain. The spot will normally pulsate with each beat of the heart. It normally closes with bone when the baby is between 12 and 18 months of age.

The eyes may be puffy because of pressure on the face during delivery. They may also be puffy and reddened if silver nitrate eye drops are used. This irritation should clear in 3 days.

A flame-shaped hemorrhage on the white of the eye (sclera) is not uncommon. It is caused by birth trauma and is harmless. The blood is reabsorbed in 2 to 3 weeks.

If your baby’s eye is continuously watery, he may have a blocked tear duct. This means that the channel that normally carries tears from the eye to the nose is blocked. It is a common condition, and more than 90% of blocked tear ducts open up by the time the child is 12 months old.

The ears of newborns are commonly soft and floppy. Sometimes one of the edges is folded over. The outer ear will assume normal shape as the cartilage hardens over the first few weeks. 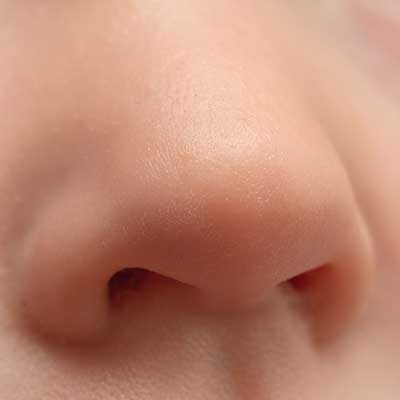 The nose can become misshapen during the birth process. It may be flattened or pushed to one side. It will usually look normal by 1 week of age.

A sucking callus occurs in the center of the upper lip from constant friction at this point during bottle or breast feeding. It will disappear when your child begins cup feedings. A sucking callus on the thumb or wrist may also develop.

The normal tongue in newborns has a short tight band that connects it to the floor of the mouth. This band normally stretches with time, movement, and growth. Babies with symptoms from tongue-tie are rare.

Little cysts (containing clear fluid) or shallow white ulcers can occur along the gum line or on the hard palate. These are a result of blockage of normal mucous glands. They disappear after 1 to 2 months.

The presence of a tooth at birth is rare. Approximately 10% are extra teeth without a root structure. The other 90% are prematurely erupted normal teeth. The distinction can be made with an x-ray. The extra teeth must be removed by a dentist. The normal teeth need to be removed only if they become loose (with a danger of choking) or if they cause sores on your baby’s tongue.

Swollen breasts are present during the first week of life in many female and male babies. They are caused by the passage of female hormones across the mother’s placenta. Breasts are generally swollen for 2 to 4 weeks, but they may stay swollen longer in breast fed babies. One breast may lose its swelling before the other one by a month or more. Never squeeze the breast because this can cause infection. Be sure to call our office if a swollen breast develops any redness, streaking, or tenderness.

The labia minora can be quite swollen in newborn girls because of the passage of female hormones across the placenta. The swelling will resolve in 2 to 4 weeks.

The hymen can also be swollen because of maternal estrogen and can have smooth 1⁄2 inch projections of pink tissue. These normal tags occur in 10% of newborn girls and slowly shrink over 2 to 4 weeks.

As the maternal hormones decline in the baby’s blood, a clear or white discharge can flow from the vagina during the latter part of the first week of life. Occasionally the discharge will become pink or blood tinged (false menstruation). This normal discharge should not last more than 2 or 3 days.

The newborn scrotum can be filled with clear fluid. The fluid is squeezed into the scronlm during the birth process. This painless collection of clear fluid is called a hydrocele. It is common in newborn males. A hydrocele may take 6 to 12 months to clear completely. It is harmless but can be rechecked during regular visits. If the swelling frequently changes size, a hernia may also be present and you should call our office during office hours for an appointment.

The testicle is not in the scrotum in about 4% of full-term newborn boys. Many of these testicles gradually descend into the normal position during the following months. In one-year-old boys only 0.7% of all testicles are undescended; these need to be brought down surgically.

Most uncircumcised infant boys have a tight foreskin that doesn’t allow you to see the head of the penis. This is normal and the foreskin should not be retracted.

Erections occur commonly in a newborn boy, as they do at all ages. They are usually triggered by a full bladder. Erections demonstrate that the nerves to the penis are normal.

Your child’s physician will test how far your child’s legs can be spread apart to be certain the hips are not too tight. Outward bending of the upper legs until they are horizontal is called 90 degrees of spread. (Less than 50% of normal newborn hips permit this much spreading.) As long as the upper legs can be bent outward to 60 degrees and are the same on each side, they are fine. The most common cause of a tight hip is a dislocation.

The lower legs (tibia) normally curve in because of the cross-legged posture your baby was confined to while in the womb. If you stand your baby up, you will also notice that the legs are bowed. Both of these curves are normal and will straighten out after your child has been walking for 6 to 12 months.

Feet Turned Up, In, or Out

Feet may be turned in any direction inside the cramped quarters of the womb. As long as your child’s feet are flexible and can be easily moved to a normal position, they are normal. The direction of the feet will become more normal between 6 and 12 months of age.

Many newborns have soft nails that easily bend and curve. However, they are not truly ingrown because they don’t curve into the flesh. 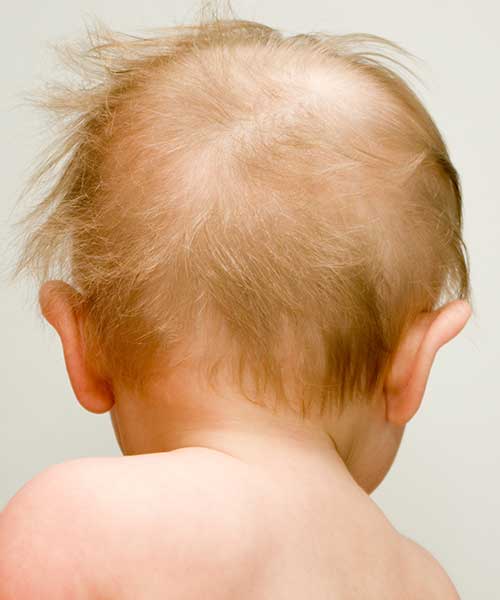 Most hair at birth is dark. This hair is temporary and begins to be shed by 1-month of age. Some babies lose it gradually while the permanent hair is coming in; others lose it rapidly and temporarily become bald. The permanent hair will appear by 6 months. It may be an entirely different color from the newborn hair.

Lanugo is the fine downy hair sometimes present on the back and shoulders. It is more common in premature infants. It is rubbed off with normal friction by 2 to 4 weeks of age.

Some findings in newborns that concern parents are not signs of illness. Most of these harmless reflexes are due to an immature nervous system and disappear in 3 or 4 months: