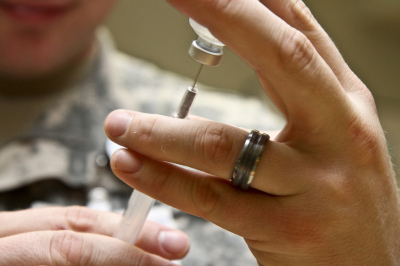 Until this year the majority of clinical studies carried out at RCR looked at new treatments for adult ailments such as migraines, joint pain, and obesity. Unlike studies that seek patients diagnosed with certain medical ailments, RCR also participates in a number of “healthy volunteer” trials to study the efficacy of vaccines.

Dr. Janet Casey, the managing physician at Legacy Pediatrics, has always had a strong desire to advance the body of knowledge on best practices in pediatric populations. Dr. Casey spent a number of years as a pediatric oncologist practicing at Duke University. Upon landing in Rochester she entered the general pediatrics field and continued her interest in research that was borne out of her work treating childhood cancer. Over the past ten years Legacy has taken part in many pediatric research studies including vaccine development and the diagnosis and treatment of acute otitis media – ear infections.

The new partnership between RCR and Legacy is reflective of the current pediatric landscape in medicine: today there are more clinical trials than ever in need of child-aged participants. These studies range in scope from evaluating device performance to studying antibiotic dosing and finally, vaccine trials looking at bolstering immune response.

“It isn’t very well known that Rochester was once at the forefront of pediatric research. After World War II, two local physicians named Dr. Burtis Breese and Dr. Frank Disney started running their own in-office studies to advance the field of pediatric antibiotic research for treating strep throat. Before long their studies focused in on vaccine development. At that time parents were clamoring for new vaccines given the success of the polio vaccine. It’s actually interesting to contrast that image with where we are today having to often persuade parents to vaccinate their children in accordance with best practice guidelines,” explained Dr. Casey.

To exemplify Dr. Casey’s point, consider measles. The disease was classified as “eradicated” in the year 2000 yet there have been well over 1,000 cases diagnosed since 2010. Worldwide the disease has claimed more than 90,000 lives since 2016. These realities open the door for travel-based exposure here in the United States. This is precisely why vaccine development work and ongoing education around their testing and safety are so vital to the public health of all citizens.

Not surprisingly, the first study that RCR and Legacy are partnering around is a vaccine trial. Last month the organizations started recruiting for a trial looking at adding a series of vaccinations against invasive meningococcal disease (IMD) in with standard well-child visits and routine shots during the first two years of life. Currently children are not vaccinated against IMD, which can be fatal, until they reach the pre-teen years. Yet IMD can strike during the first year of life when babies are so vulnerable to infectious disease. Luckily the ailment is fairly rare in the United States, though there have been isolated outbreaks. Across the world in both developed and third-world countries however, outbreaks are more common. When the disease is transmitted, the onset of symptoms is rapid and death can occur in a matter of hours.

“Our objective is to enroll 30 infants in the trial starting when they are two-months of age. We already have the first few participants engaged and are happy to be able to offer an added layer of disease protection to all who enroll,” explained Dr. Casey.

“We are thrilled to collaborate with Dr. Casey and the team at Legacy Pediatrics. We know that with RCR’s sponsor relationships and strong performance track record combined with Janet’s research passion and experience that we have a real opportunity to provide groundbreaking care options for pediatric patients. This population has been steadily under-served in the research space. As a new parent myself, I am thrilled to help accelerate the review of potentially lifesaving drugs and return our city to its position as a leader in this very important area,” offered Adam Larrabee, president of Rochester Clinical Research.