Another flu season is upon us. And we are left hoping it will be nothing like last year, which proved to be one of the worst flu seasons we have had in many years. The 2012-2013 season brought two surges of flu in New York State, with the first surge being influenza A and the second surge being influenza B. Not only did we see high reports of flu, but we saw the flu season span a longer period of time than we were used to.  The first cases of flu started as early as November and we continued to see it into May. We even had patients who were unlucky enough to have it twice within the same season. 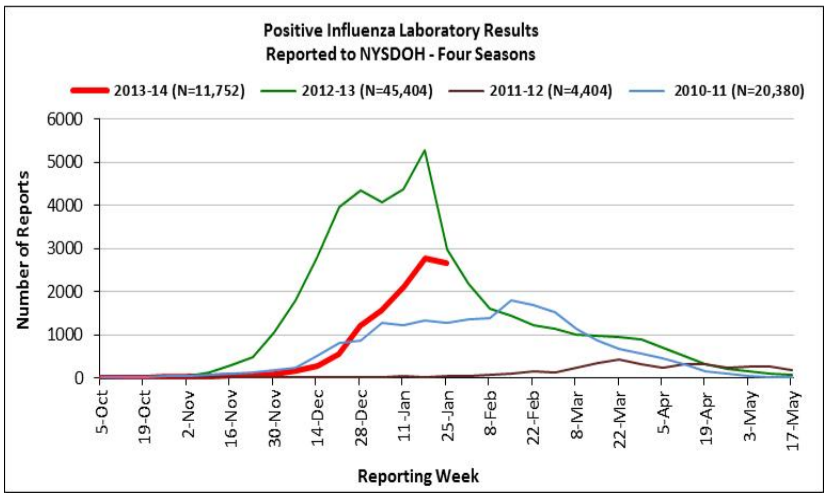 So as we embark on the 2013-2014 season, we are facing lots of questions, concerns, and misconceptions regarding the flu shot.  Here is a list of the top things I hear from our patients, and our response.

“I know people who got the flu shot last year and still got the flu.  So what’s the point?”

The flu shot is not perfect. Every year scientists and epidemiologists from around the world look at trends of certain strains of influenza A and influenza B and predict which ones will be the most predominant for that season.  They aren’t always 100% right.  The good news is that people who have had the flu shot, but still unfortunately get the flu, tend to have a milder course of flu and fewer complications in comparison to those who didn’t get the flu shot at all.   So just because it wasn’t a great match one year, doesn’t mean that it’s a lost cause.

This also brings me to what I feel is the most important aspect of getting the flu shot that isn’t talked about enough.  The flu shot is not there just to protect YOU, but to protect everyone AROUND you.  This includes your family, friends, school mates, co-workers, and the entire community that you live in.  Historically, the higher the rate of flu vaccination in an area, the less flu burden there is.  This brings me to something amazing about vaccinations called “herd immunity.”  The more people in the “herd” who are vaccinated and protected against flu, the less flu there will be circulating, which means a lesser chance of people getting the flu who aren’t properly protected.

So this ties into another comment I hear a lot from parents, “my kids are pretty healthy, so they don’t need it.”  Getting the flu shot is not just about the person getting the flu shot.  It’s about the community as a whole.  Getting your flu shot and having your kids get their flu shot, helps protect your elderly grandmother, your neighbor on chemo, your new baby cousin who is 1 month old, etc.  This is a particularly important fact because children are the major vector every year in getting and spreading the flu.  In the Houston Family Study, it showed rates of infection with flu in children <17 years of age ranged from 40-50% in a season whereas adult infection rates were around 20%.  So, our healthy, young, kids are the ones who are getting influenza and spreading it to sicker individuals.  And even if these sicker individuals have gotten the flu shot, their weakened immune system may not mount a protective response enough to protect them if exposed.  So getting your flu shot helps the entire community, so do your part!!

“I’ve never had the flu shot, and I’ve always been fine.”

This is probably my favorite comment I hear.  This statement and the logic in this statement is flawed.  I liken it to saying, “I’ve never worn my seatbelt in the car and I’ve never gotten hurt so why do I need it?”  Just because you or your child has gotten by on chance thru out the years, is not a reason to NOT get a flu shot.  In fact, the reason why your child hasn’t gotten the flu in the past is because of other people getting their flu shot and creating a good herd response surrounding them.  So my response to this statement is, “That is great!  Please thank all the people and children you are surrounded by who HAVE received their flu shot because they protected you.”

“It seems like my child has to get so many vaccines, so if he/she doesn’t HAVE to get it, then I’d rather not.”

It is true that some vaccines are mandated by schools and others are not.  Although this certainly doesn’t correlate with which ones are the most important and which ones aren’t.  If we look at your child’s chance of getting any of the disease processes we vaccinate against, by far, flu is the highest.  There is an estimated 16-63 million cases of influenza a year.  This is in comparison to the second highest which is HPV (6 million cases a year according to the CDC) and a combined 62,000 cases of the rest of the diseases we vaccinate against (mumps, meningococcal disease, Hepatitis A, Hepatitis B, Haemophilus influenza, varicella, pertussis, etc.).  So looking at these numbers, if your child has the highest chance of getting flu, why would you choose to not vaccinate against it, but vaccinate against the others?

In a perfect world, the flu shot would be mandated.  Vaccines save lives.  There has been no scientific proof that the number of vaccines a person gets in their lifetime correlates with any harm to that person. In fact, it does the opposite.  The more vaccines you receive, the better the chance you have of warding off these diseases.  Vaccines tell your immune system what to watch out for, and to not let them in.  It’s as simple as that.

I love this chart below because it shows actual numbers that prove this point.   Although not specifically related to influenza, this information carries across to other vaccine preventable diseases.  Before vaccines, the combined 10 diseases in the chart caused 11,438 deaths annually vs. 101 after mandated vaccination.  And if you look at the number of people who actually got sick with the diseases, you’ll see over 5 million people were sick before vaccines in comparison to almost 84,000 after mandated vaccination.  These numbers are astounding. 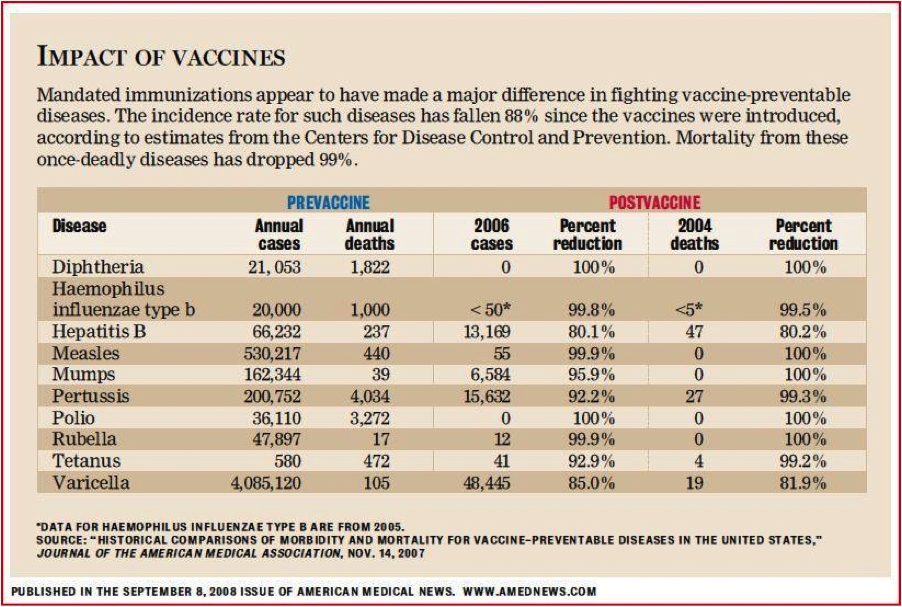 “I got the flu vaccine once and I got sick from it.”

This might be THE most common misconception out there amongst the general public.  The flu vaccine cannot give you the flu.  May I repeat, THE FLU VACCINE CANNOT GIVE YOU THE FLU. It is an inactivated vaccine (some people call this a “dead” vaccine), which makes it impossible to get the flu from it. The main reason why this seems to be such a misconception, is that the flu shot is given during cold and flu season.  What this means is that hundreds of other circulating virus’s (colds) are going around when you get the flu shot.  So when someone gets the flu shot and gets a cold within a few weeks of the shot, they blame it on the flu shot when it actually had nothing to do with it.  Also keep in mind that it takes 2 weeks for the flu shot to cause enough of an immune response to actually protect you.  So if you were to get the flu shot and then actually catch the flu under this 2 week mark, that means that the shot wasn’t given a chance to work yet, NOT that it actually gave you the flu.

Now the FluMist nasal spray is what we call a live, attenuated (which means weakened), vaccine.  This means that the virus is live but so weakened that it cannot cause actual infection.  In fact, the way the FluMist vaccine works is that it only replicates in the colder temperatures of the nose, therefore, it cannot move down into the throat or lungs and cause actual disease.

“How do I decide between the FluMist nasal spray and the regular flu shot for my child?”

This is an excellent question that we also get a lot from parents.  First and foremost, it’s about your child’s preference.  To avoid a shot, children love the idea of a nasal spray, but, on the flipside, I’m always surprised on the number of children who think it’s weird to have something squirted up their nose and would rather CHOOSE the shot form.  So besides personal preference, here are the facts.  FluMist works BETTER for kids ages 2-5.   In FluMist studies, there was a 54.5% reduction in flu cases in kids in this age range who got the FluMist vs. the flu shot.

Now some children won’t be able to have the choice between the FluMist nasal spray and the flu shot.  If your child has a moderate-severe history of asthma, then they most likely will not be able to receive the FluMist.  There is a higher risk of wheezing in asthmatic individuals who receive the FluMist, therefore, the only option will be the flu shot.  If your child has a history of asthma or wheezing, ask us at their appointment which vaccine would be better for them, as this is based on their personal asthma history.

So in summary, please get your flu shot and have your children get theirs.  I hope after reading this you realize it’s safe, effective, and may save you, your family, and the people around you, from misery and heartache.