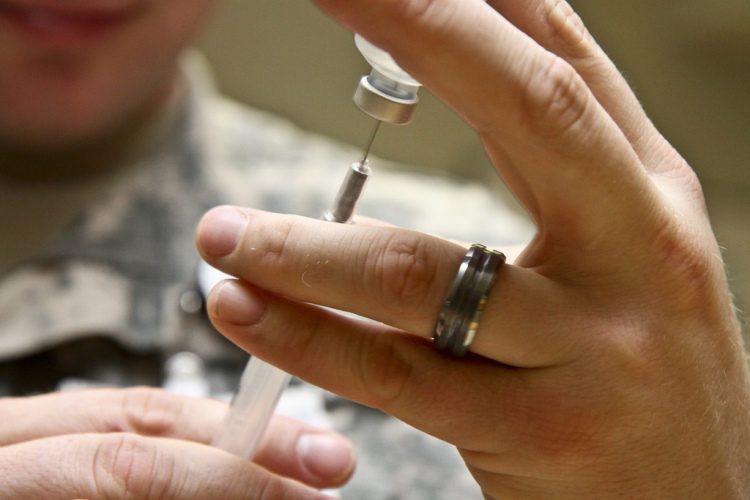 Most parents know that the Flu vaccine has been proven to reduce the frequency of not only the flu but also ear infections, sinus infections and pneumonia caused by a bacteria called “pneumococcus”.  How that happens is becoming clear.  Our group has been studying the details of the interaction between Flu virus and pneumococci to unravel the steps in the dance between the flu virus and the pneumococcus in the nose that results in significant respiratory diseases.  Pneumococci live in the posterior part of the nose and upper throat as usually peaceful bacteria in all of us, harmlessly present in relatively low numbers.  The bacteria are so common that our studies to detect pneumococci in the nose and throat discover their presence in up to 80% of infants and young children and about 20% of adults at any one time.  However, the bacteria are harmless in patients that have a competent immune system unless an intercurrent viral upper respiratory infection like a cold or the flu occurs.

The trigger in disease caused by pneumococcal infections is a viral URI, and particularly influenza infection.  The combination of pneumococci and flu in the nose can cause compromise in multiple aspects of host defense: Structural change occurs as swelling of the nasal, sinus and lung passageways; we call it “congestion”.  Change occurs with increased and thickened mucus production: we call it mucus or snot or phlegm.  Thus the stage is set for compromise in the immune response.

Immunity basically translates to the response of white blood cells (neutrophils, macrophages and lymphocytes) that are constantly present in the respiratory pathways or migrate there in response to signals from the site of infection that a problem is brewing.  NOW YOU KNOW WHY WE USE BLOOD TO TEST FOR WHITE BLOOD CELLS WHEN OUR PATIENTS ARE SICK! To start the process of immunity chemicals are released from resident nose, throat, sinus and lung cells.  The viruses enter the cells of the nasopharynx and tracheobronchial tree and leave a change on the surface of the epithelial cells that alerts immunity cells to kill and destroy those cells harboring virus.  The immunity cells ingest the bacteria by recognizing the bacteria that are foreign.  Sometimes that is all that is needed and the host clears the infection.  But sometimes the immune response is not enough. The inflammation caused by the virus, such as flu virus, creates a very favorable environment for the pneumococci bacteria.  So the pneumococci start to reproduce in abundance.  Then when the secretions of the nose are swept into the middle ear or the sinus drainage pathways or into the trachea and bronchi and then the lungs we see the clinical manifestations of acute ear infections, sinusitis or pneumonia.  The immunity response failed.

Vaccines, and specifically flu vaccine for this article, prepares the immune system in advance for exposure to the germs.  The protective response is when the immune cells recognize and adapt to the presence of foreign microbes.  The interaction between the immune system and the infection takes a few days to occur (3-5 days) if the host has prior immunity from prior infections or vaccination.  If there is no prior immunity and no vaccination then it takes 10-14 days for the immunity response to kick in strong enough to clear the infection.  During that extra time the pneumococci bacteria may increase in numbers, causing more inflammation and we see those fevers, redness and swelling at the site of infection, and pain.  Next, disease occurs and we see ear infections, sinus infections and pneumonia.

So influenza can cause all of the events above by itself but when the virus dances with the pneumococci and the pneumococci benefits from the partnership,  that germ is one of the most frequent cause of ear infections, sinusitis and pneumonia.  And all of that could have been prevented in most of our patients if they only got their annual flu vaccine.

Home » Spring is here! » Announcements » Why get flu vaccine?